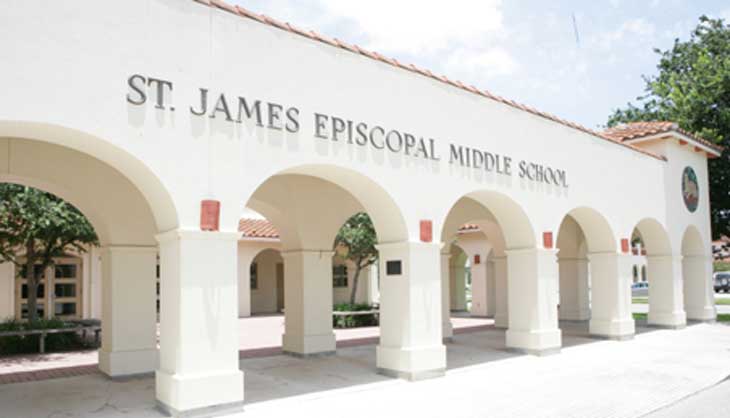 By the end of 1959, St. James Episcopal School was already growing more rapidly than the Church of the Incarnation campus could accommodate, and the School returned to the beautiful new buildings at the Church of the Good Shepherd in September of 1960. During that decade of building and construction, the Church had added the Sanctuary, Munds Hall, Foster Hall and the land on which Brown Hall would later be built. These buildings all form the heart of the St. James campus today.

Between 1960 and 1967, St. James opened a new grade level each year, with the class of 1967 becoming St. James’ first Sixth Grade graduating class. The school continued to grow and prosper, establishing itself as a leader in education in the area. During the 1980’s, St. James improved its campus and programs by adding the McNeil gymnasium, an upper campus, a multi-purpose activity room, computer and media centers, and a school library. In the early 1990’s, Dobbins Hall was completed, and the St. James Middle School expanded to include Grades 7 and 8.

In 2000, the 20,000 square foot Middle School building, including science and computer labs, and a multi-purpose assembly hall, was dedicated to accommodate our expanding Middle School grades. An overhead skywalk, called “The Link”, unites the middle school campus with the lower school campus. St. James Episcopal School is now separately incorporated and operates under a governing Board of Trustees.